The majority of North American households depend on a central furnace to provide heat. A furnace works by blowing heated air through ducts that deliver the warm air to rooms throughout the house via air registers or grills. This type of heating system is called a ducted warm-air or forced warm-air distribution system. It can be powered by electricity, natural gas, or fuel oil.

Inside a gas- or oil-fired furnace, the fuel is mixed with air and burned. The flames heat a metal heat exchanger where the heat is transferred to air. Air is pushed through the heat exchanger by the “air handler’s” furnace fan and then forced through the ductwork downstream of the heat exchanger. At the furnace, combustion products are vented out of the building through a flue pipe. Older “atmospheric” furnaces vented directly to the atmosphere, and wasted about 30% of the fuel energy just to keep the exhaust hot enough to safely rise through the chimney. Current minimum-efficiency furnaces reduce this waste substantially by using an “inducer” fan to pull the exhaust gases through the heat exchanger and induce draft in the chimney. “Condensing” furnaces are designed to reclaim much of this escaping heat by cooling exhaust gases well below 140°F, where water vapor in the exhaust condenses into water. This is the primary feature of a high-efficiency furnace (or boiler). These typically vent through a sidewall with a plastic pipe. 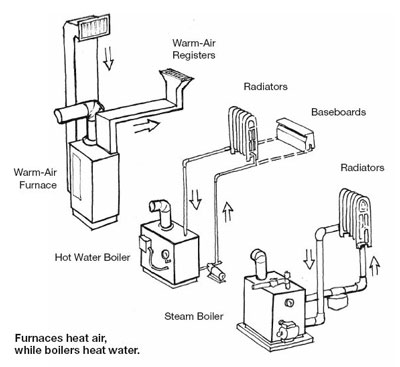 Heating system controls regulate when the various components of the heating system turn on and off. The most important control from your standpoint is the thermostat, which turns the system — or at least the distribution system — on and off to keep you comfortable. A typical forced air system will have a single thermostat. But, there are other internal controls in a heating system, such as “high limit” switches that are part of an invisible but critical set of safety controls. 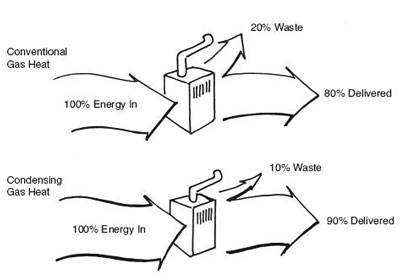 The best gas furnaces and boilers today have efficiencies over 90%

In the U.S., furnace efficiency is regulated by minimum AFUE (Annual Fuel Utilization Efficiency). AFUE estimates seasonal efficiency, averaging peak and part-load situations. AFUE accounts for start-up, cool-down, and other operating losses that occur in real operating conditions, and includes an estimate of electricity used by the air handler, inducer fan, and controls. AFUE is like your car mileage between fill-ups, including both highway driving and stop-and-go traffic. The higher the AFUE, the more efficient the furnace or boiler.

Boilers are special-purpose water heaters. While furnaces carry heat in warm air, boiler systems distribute the heat in hot water, which gives up heat as it passes through radiators or other devices in rooms throughout the house. The cooler water then returns to the boiler to be reheated. Hot water systems are often called hydronic systems. Residential boilers generally use natural gas or heating oil for fuel.

In steam boilers, which are much less common in homes today, the water is boiled and steam carries heat through the house, condensing to water in the radiators as it cools. Oil and natural gas are commonly used.

Instead of a fan and duct system, a boiler uses a pump to circulate hot water through pipes to radiators. Some hot water systems circulate water through plastic tubing in the floor, a system called radiant floor heating (see “State of the Art Heating”). Important boiler controls include thermostats, aquastats, and valves that regulate circulation and water temperature. Although the cost is not trivial, it is generally much easier to install “zone” thermostats and controls for individual rooms with a hydronic system than with forced air. Some controls are standard features in new boilers, while others can be added on to save energy (see the “Modifications by Heating System Technicians” section on the heating maintenance page).

As with furnaces, condensing gas-fired boilers are relatively common, and significantly more efficient than non-condensing boilers (unless very sophisticated controls are employed). Oil-fired condensing boilers are uncommon in the U.S. for several reasons related to lower latent heat potential, and potential for greater fouling with conventional fuel oil.

Heat pumps are just two-way air conditioners (see detailed description in the cooling systems section). During the summer, an air conditioner works by moving heat from the relatively cool indoors to the relatively warm outside. In winter, the heat pump reverses this trick, scavenging heat from the cold outdoors with the help of an electrical system, and discharging that heat inside the house. Almost all heat pumps use forced warm-air delivery systems to move heated air throughout the house. 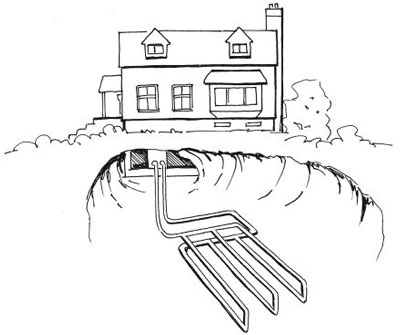 A ground-source heat pump heats and cools in any climate by exchanging heat with the ground, which has a more constant temperature.

Whereas an air-source heat pump is installed much like a central air conditioner, ground-source heat pumps require that a “loop” be buried in the ground, usually in long, shallow (3–6' deep) trenches or in one or more vertical boreholes. The particular method used will depend on the experience of the installer, the size of your lot, the subsoil, and the landscape. Alternatively, some systems draw in groundwater and pass it through the heat exchanger instead of using a refrigerant. The groundwater is then returned to the aquifer.

Because electricity in a heat pump is used to move heat rather than to generate it, the heat pump can deliver more energy than it consumes. The ratio of delivered heating energy to consumed energy is called the coefficient of performance, or COP, with typical values ranging from 1.5 to 3.5. This is a “steady-state” measure and not directly comparable to the heating season performance factor (HSPF), a seasonal measure mandated for rating the heating efficiency of air-source heat pumps. Converting between the measures is not straightforward, but ground-source units are generally more efficient than air-source heat pumps.

In some areas, gas-fired direct heating equipment is popular. This includes wall-mounted, free-standing, and floor furnaces, all characterized by their lack of ductwork and relatively small heat output. Because they lack ducts, they are most useful for warming a single room. If heating several rooms is required, either the doors between rooms must be left open or another heating method is necessary. Better models use “sealed combustion air” systems, with pipes installed through the wall to both provide combustion air and carry off the combustion products. These units can provide acceptable performance, particularly for cabins and other buildings where large temperature differences between bedrooms and main rooms are acceptable. The models can be fired with natural gas or propane, and some burn kerosene.

Gas or kerosene space heaters that do not have an exhaust vent have been sold for decades, but we strongly discourage their use for health and safety reasons. Known as “vent-free” gas heating appliances by manufacturers, they include wall-mounted and free-standing heaters as well as open-flame gas fireplaces with ceramic logs that are not actually connected to a chimney. Manufacturers claim that because the products’ combustion efficiency is very high, they are safe for building occupants. However, this claim is only valid if you keep a nearby window open for adequate fresh air— which defeats the purpose of supplemental heat. Dangers include exposure to combustion by-products, as discussed in Ventilation, and oxygen depletion (these heaters must be equipped with oxygen depletion sensors). Because of these hazards, at least five states (California, Minnesota, Massachusetts, Montana, and Alaska) prohibit their use in homes, and many cities in the United States and Canada have banned them as well.

Portable (plug-in) electric heaters are inexpensive to buy, but costly to use. These resistive heaters include “oil-filled” and “quartz-infrared” heaters. They convert electric current from the wall socket directly into heat, like a toaster or clothes iron. As explained further under “Selecting a New System,” it takes a lot of electricity to deliver the same amount of useful heat that natural gas or oil can provide onsite. A 1,500- watt plug-in heater will use almost the entire capacity of a 15-amp branch circuit; thus, adding much additional load will trip the circuit breaker or blow the fuse. The cost to operate a 1,500-watt unit for an hour is simple to compute: it is 1.5 times your electricity cost in cents per kilowatt-hour. At national average rates—12¢ kWh for electricity— that heater would cost 18¢ per hour to run—and quickly cost more than its purchase price. On the other hand, for intermittent use, it is the “least-bad” solution when alternatives would require major investments to improve ductwork for a specific area, for example. Just remember, electric resistance heat is usually the most expensive form of heat, and it is, therefore, seldom recommended.

“Electric baseboard heat” is yet another kind of resistive heating, similar to a plug-in space heater except that it is hard-wired. It has two principal virtues: the installation cost is low, and it is easy to install individual room thermostats so you can turn down the heat in rooms that aren’t being used. Operating costs, as for all resistive systems, are generally very high, unless the house is “super-insulated.”

Wood heating can make a great deal of sense in rural areas if you enjoy stacking wood and stoking the stove or furnace. Wood prices are generally lower than gas, oil, or electricity. If you cut your own wood, the savings can be large. Pollutants from wood burning have been a problem in some parts of the country, causing the U.S. Environmental Protection Agency (EPA) to implement regulations that govern pollution emissions from wood stoves. As a result, new models are quite clean-burning. Pellet stoves offer a number of advantages over wood stoves. They are less polluting than wood stoves and offer users greater convenience, temperature control, and indoor air quality.

Gas (and most wood) fireplaces are basically part of a room’s décor, providing a warm glow (and a way to dispose of secret documents), but typically not an effective heat source. With customary installations that rely on air drawn from the room into the fireplace for combustion and dilution, the fireplace will generally lose more heat than it provides, because so much warm air is drawn through the unit and must be replaced by cold outside air. On the other hand, if the fireplace is provided with a tight-sealing glass door, a source of outside air, and a good chimney damper, it can provide useful heat.

State of the Art Heating

Radiant floor heat generally refers to systems that circulate warm water in tubes under the floor. This warms the floor, which in turn warms people using the room. It is highly controllable, considered efficient by its advocates, and is expensive to install. It also requires a very experienced system designer and installer, and limits carpet choices and other floor finishes: you don’t want to “blanket” your heat source.

Ductless, Mini-Split, Multi-Split. Residential ductwork is relatively rare outside North America. “Ductless” heat pumps, which distribute energy through refrigerant lines instead of water or air, are widely used. Large field trials in the Pacific Northwest suggest that they can have good cold weather performance, and be very cost-effective where replacing electric resistance heating. Like ground-source systems, relative immaturity of the market helps assure that whole-house multi-split systems carry premium prices.

Combined heat and power (CHP) or cogeneration for houses is being seriously studied in some countries. The basic premise is to use a small generator to meet some of the electric demand of the house, and recover the waste heat (typically more than 70% of the heating value of the fuel) to heat the house (hydronic or water-to-air systems) and make domestic hot water. These systems are not yet widely available. They are likely to have the best economics in houses with high heating bills because the house cannot be feasibly insulated, such as solid stone or brick homes. 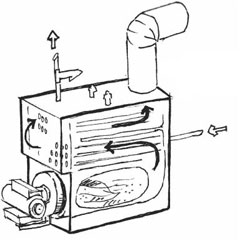 Boilers work like furnaces, except that they heat water instead of air. 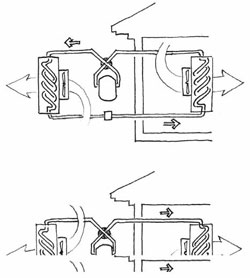 For product reviews, incentive information, and other resources on wood and pellet stoves, visit the Alliance for Green Heat website.