Our tips do more than save energy. They save you time and money. Plus, they reap other benefits. Air drying, for example, is better for your clothes than using a dorm dryer. Walking or cycling is better for your health than driving around campus. Turning down your laptop’s screen brightness and using blackout blinds make it easier to fall asleep and sleep in on weekends.

Best of all, you can feel good about shrinking your carbon footprint and doing your part to protect the planet. Seriously. When we waste less energy, we need fewer power plants, which emit harmful pollutants and heat-trapping greenhouse gases — especially coal-fired ones. Consider this: If every US college student replaced a single incandescent light bulb with an LED, we could avoid the emissions of a small commercial power plant for the school year.

So make a statement! Start by answering a few questions: How much stuff do you really need? Could you share rather than buy? Sure, some students will swag out their rooms with energy-guzzling TVs, game consoles, microwaves, or mini-fridges. You can do better. Check out our shopping guide and tip sheet. 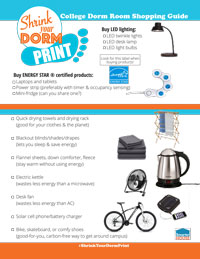 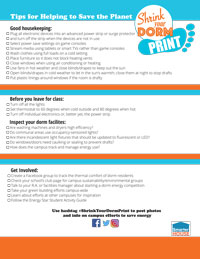 Keep in mind these basic steps:

Buy the most efficient models of items you need. Look for the blue ENERGY STAR® label, which signals products that are among the most efficient in their category. These products aren’t necessarily more expensive to buy, and by using less energy, they’re cheaper in the long run. You can learn more about the product categories and their qualifying models.

Find alternatives. If you’re a cocoa, tea, or coffee fanatic, use an electric kettle rather than a microwave. (Take our quiz to find out how much energy a kettle can save.) If you have to cook or warm food in your room, a microwave uses less energy than a toaster oven, especially microwaves with sensors and variable power settings that reduce cooking time. To minimize or avoid using air conditioning, use a fan or take a cold shower before bed.

Reuse when feasible. Since energy is used to make products, we can save energy by reusing items — flannel sheets, blackout drapes, etc. We know it’s fun to decorate with cool new stuff, but if every college freshman does so, you can imagine the waste. Check local resale shops, eBay, Craigslist, or Freecycle. Important caveat: With some electronics or appliances such as mini fridges, it’s better to buy a new efficient one rather than reuse an old energy guzzler.

Go LED. If you want twinkle lights or a desk lamp, make sure they use LEDs, or light emitting diodes. These light bulbs use a fraction of the energy of incandescents, last a lot longer, and look the same. They’ve also plummeted in price; most now cost less than $10. LEDs have other benefits, too. You can take LEDs with you when you move, but if you want to spread the green love, leave them for the next student.

Stream smarter. You can save energy by streaming to a smart TV rather than a digital media player, which is still much better than a game console. Even better: stream to a small screen such as an ENERGY STAR-certified tablet. (Take our quiz to find out how much a tablet can save.)

Give your laptop a rest. Computers can be a student’s biggest energy hog — if it stays on all the time. Fortunately, most electronics now have settings such as automatic turn off that reduce energy use. Select those settings, dim your screen (especially at night so you feel drowsy enough to sleep), and make sure your computer sleeps, too. Remember: screensavers don’t save energy; sleep mode does. 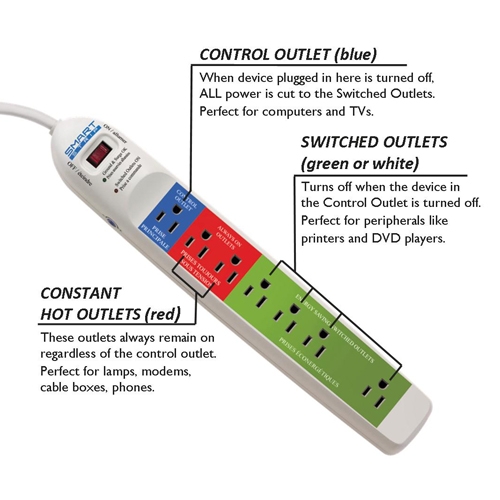 Use a power strip. The single best thing to buy is an advanced power strip or surge protector, which makes it much easier to turn off electronics when they’re not in use. Plug all electronics into this strip and unplug or turn off the strip when you leave. Some strips have timers, occupancy sensors, and remote switches. A master-controlled one can, once a primary device such as a computer is turned off, automatically turn off the outlets used by accessories such as speakers and monitors. Find out more in this infographic and learn how to select the right power strip for you.

Always turn off the lights. If you can’t plug them into your power strip, remember to flip their switch when walking out the door.

Share photos and info. Use #ShrinkYourDormPrint to let everyone know about your school’s efforts to save energy. 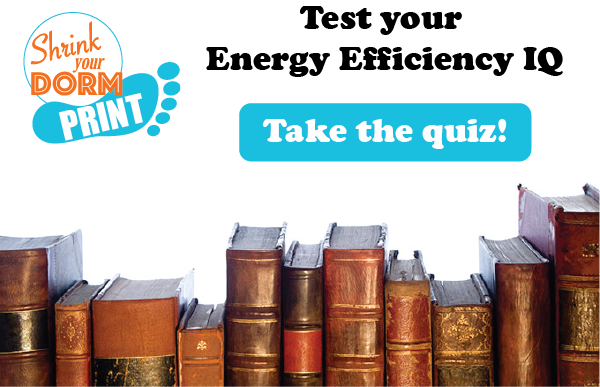 Many campuses and college students are trying to save energy and encourage sustainable living. Colleges are taking simple steps such as using LEDs for parking lots and reserving fewer rooms for Friday night and Saturday classes. They’re encouraging students with light bulb exchanges and, as with the University of Pennsylvania and Georgetown University, campus challenges.

They’re also upping the efficiency of their buildings, including dorms, and their power plants. An increasing number, including Trinity College, have installed or plan to build fuel cell power plants. Stanford University has one of the most innovative projects, known as the Stanford Energy System Innovations.  It has moved from an entirely fossil-fuel-based combined heat and power plant to a 70% more efficient electric heat recovery system.

For their part, students are taking individual steps such as switching to LEDs, prodding campus-wide efforts such as “shut the sash” campaigns to close fume hoods in science labs, and participating in energy-saving competitions such as the Lucid Campus Conservation Nationals and the Northwest Earth Institute’s Campus EcoChallenge.

Recent polls may explain this flurry of activity. The 2016 Survey of America’s College Students found that 86% consider global warming a serious problem, up from 80% a year earlier. The 2015 survey found that 76% prefer the United States focus on energy-saving regulations rather than increased energy production.

Some groups are reviewing and encouraging campus efforts. The Sierra Club ranks the 20 “greenest” colleges based on several factors, including energy use, and Electric Choice, a consulting firm, lists the 25 most energy-efficient colleges. The National Wildlife Federation has developed a leadership program, known as EcoLeaders.

The voluntary federal ENERGY STAR program has a Student Activity Guide and a Showcase Dorm Room Guide. It says the energy savings of any single dorm room may be modest, but it emphasizes the ripple effect of involving every student.

Here are a few of the many colleges taking action:

University of Denver has launched a Green Room Certification program. As you can see in the above video, it wants to get students accustomed to making sustainable decisions while living in the dorms so they will continue those practices when they move off campus.

Tulane University, which unveiled the first ENERGY STAR showcase dorm room in 2001, has The Green Guide for new students. It encourages students to shop “energy smart” and to take what they’ve learned about energy efficiency and apply it to their dorm lifestyle.

Brown University has created a Green Packing List to help students get started. It gives each freshman a free LED light bulb, rents ENERGY STAR fridges, and sells advanced power strips as well as drying racks in its bookstore.

University of Central Florida hosts an annual Kill-a-Watt Energy Conservation Competition, now a decade old. During each two-month period, the competition has saved an average of $50,000 worth of electricity. Collectively, it’s saved enough energy to power 200 average US homes for a year.